A Day in the Life of a Cleanroom

On the 9th of April the James Webb Space Telescope’s heart was installed at NASA’S Goddard Space flight centre.

Situated in Greenbelt, Maryland, the site is home to the world’s largest cleanroom.

The installation required an amazing precision ‘wiggle’ because the core piece of the telescope had to “avoid interference with already installed systems”.

Maurice de Plate, of the European Space Agency said that the cleanroom operators had to be careful not to “crash into” [disturb the air around] the space.

The other materials are incredibly brittle, and any damage could cause massive project set-backs.

At the beginning of February NASA released a video of sped-up footage showing engineers working in the cleanroom.

It’s fascinating to see a cleanroom of this scale in action. 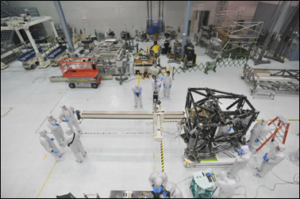 We are pleased to announce that cleanrooms Australia has just acquired the first distributorship for the mideco range of products. Mideco is a long-standing trusted [...]

The 10 Common Traps in designing and constructing cleanrooms

Traps encountered with cleanroom design and construction aren’t technically traps. They are more commonly oversights by people who can picture the image of a cleanroom [...]

Cleanrooms Australia is extremely proud to have won this esteemed Highly Commended Award. As Australian industry becomes more serious about addressing climate change, we will [...]